he lives in florida apparentlee

he k;inda looks white dontcha think. his cargo pants say so as well

sapiosexual & proud! he has a crush on kenny because keny is a smartass who reads bookz

her bootz may look ugly but theyre actually uggs. those boots are expensive as Fuck you know

her dress is gucci;its expensive as fuck

do not ask him about his name

wow! those ppants are,the very embodiment of swaggy if you ask me!

his ears look big in this picture

he could use some hair conditioner noah fence

FUCK his coat its UGLY

Knuckles is a 16-year-old red anthropomorphic echidna, the only living descendant of a well-established clan of echidnas. For many years, his clan guarded a giant gemstone called the Master Emerald, which controls the Chaos Emeralds, objects central to the Sonic the Hedgehog game series. As such, Knuckles has spent most of his life atop a floating island called Angel Island, guarding the Emerald from harm. He has grown up fairly introverted as a re 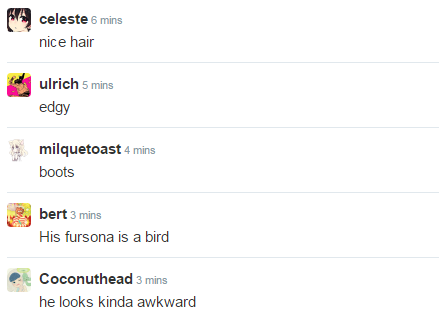 sweetie, you are literally so out of line it’s fucking unbelievable. i could drag you so hard right now but i know you’ll just end up crying. i’ve roasted you before and you know it. chances are you’ll just say i bullied you because you’re gay and have different skin. talk shit get hit, you don’t wanna mess with me kiddo; i’ve got a black belt. i know threats are fucked up but that’s all i’ve been receiving all day, probably from her royal hoodrat olive and all of her nasty friends. but you can gang up on me and make fun of me for being goth all you want. i’ve been hurt a lot. my first boyfriend cheated on me, my dad screams if i forget to do my chores, and there are some days i don’t even want to get out of bed in the mornings. i’m a jaded teenage girl. i’ve been through shit that you wouldn’t even dream of. you think your life is hard? try asking the cutest guy in your grade out in the middle of the cafeteria only to find out he has a fucking girlfriend. you don’t know my life or my story so keep my name out of your nasty mouth. life is a battlefield and it looks like i’ve already won.